I'm going to try something new. I'm going to walk through a cash lineup construction process this morning and then evaluate it next week once it's played out. Footballguys.com has a great DraftKings Interactive Lineup Tool that you can use to construct your lineup before entering it, and I'm going to use that to help me this morning.

I usually like to start with a value defense to give me the most flexibility. This week there are a couple good options. San Francisco (2100) is on the road at Cleveland. The Over/Under on this game is only 41. Johnny Manziel will be under center this week, and the 49ers have held Jay Cutler (202 Passing yards, 0 TDS, 1 Int) and Carson Palmer (271 passing yards, 0 Passing TDs, 1 Rushing TD) in check the last two weeks. They make a good value option defense in my eyes.

I'm all over Austin Seferian-Jenkins this week at TE on DraftKings. He's only 2700 this week and the Saints are really weak against opposing TEs. He only need 4 receptions for 50 yards to reach 3X value and I think he should be able to do that no problem.

Next I look at RB. With Mark Ingram on IR, C.J. Spiller is in line to see a lot more action this week. How much is still in question, because he's going to split time with Tim Hightower, but at just 3000 on DraftKings this week, he's in the same boat as ASJ. 4 Receptions for 50 total yards and he's at 3x value. I think Spiller is a slam dunk this week.

For RB2, I'm stacking Shaun Draughn with the 49er defense. Draughn is an incredibly boring choice as a fantasy player, but he's getting a lot of opportunities. 4800 is not as dirt cheap as Spiller, but it's still pretty reasonable given that Draughn is facing a Cleveland defense that's in the middle of the pack against opposing RBS. But Draughn has had five or more receptions in the last three games, and he's reaching 70-90 yards from scrimmage as well. That's pretty close to 3x value, and if he reaches the end zone, he will be worth it. This is more of a 'high floor' pick that you like in cash games than a 'big upside' pick.

After my first four picks, my lineup looks like this: With 37400 remaining, I have a lot of flexibility to fill in my remaining positions.

There are a couple options at QB, but with all the value that I've landed, I'm looking to get points here. Cam Newton is a great pick, but at 7500, he might be too expensive if I want to load up at WR this week. So I will insert Russell Wilson at 6300 instead. The Ravens are looking at rolling out Jimmy Clausen at QB this week and Clausen had just 63 passing yards against the Seahawks when he was with the Bears back in week 3. Wilson has a solid floor and the Seahawks should really run over the Ravens in this game. Maybe I should have considered the Seahawks defense as well?

On to WR. At this point I have a ton of leftover salary so the first two people that jump off the page for me are Odell Beckham Jr. and Antonio Brown. Beckham is on fire right now with more than 100 yards receiving in each of his last five games and six receiving TDs within that same span. He faces a weak Miami defense on Monday Night in a game that the Giants have to win. Brown has a tougher division matchup against the Bengals, but he has almost 600 receiving yards and 4 receiving TDS over the last four weeks. He's good for at least six receptions based on pure volume of targets and the Steelers look to him in the red zone. He also has the possibility of a return TD which can add another opportunity to score.

With 13100 left, the next guy that stands out to me is Brandon Marshall. He's had back to back 131 yard receiving games and had 3 TDS in the same span. He has at least 1 receiving TD in his last five games as well. This week the Jets face a Tennessee defense that is tough against the run but extremely vulnerable to the pass. The Jets will need to throw a ton in this game and Marshall will be a big beneficiary. At 7600, he makes a great 3rd WR.

Sticking with WR for the flex position and with 5500 left, the name that jumps off the page is Jeremy Maclin. Maclin has been a target monster these last two weeks with 9 receptions in each game, and a combined 255 receiving yards and 3 receiving TDS. This week the Chiefs face the Chargers who have been vulnerable through the air at points this season. It's another case where a high-floor potential makes Maclin the perfect guy to insert in my offense for the final pick.

Since I have Beckham and Maclin in my lineup, I made sure to swap Beckham to the flex position. Since this is a cash lineup, I don't expect to make a late swap on Monday night, but if something comes up, it would be good to have the flexibility to insert anyone from that game into this position. 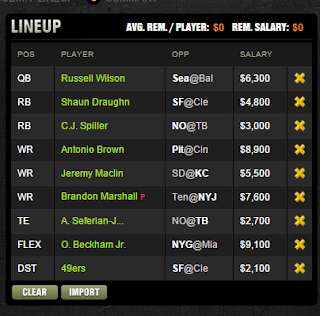 Now I don't expect that this lineup will be the top scoring lineup in the DraftKings Millionaire Maker GPP or anything, but I'm going to use this in my cash lineups this weeks to make sure my bankroll stays strong.